Oh My Word!  What an honour!  Chrys Fey of Write with Fey nominated my blog for the Liebster Award.

I've pretty much allowed my blogging to take a back seat to 'life as she needs to be lived' since the April Blogging A-Z Challenge  finished and then, I woke up way too early this morning to Gina Stoneheart's comment on my previous post.  Thank you so very much, Chrys, I'm humbled to have been nominated by you with your other 10 exceptional nominees. 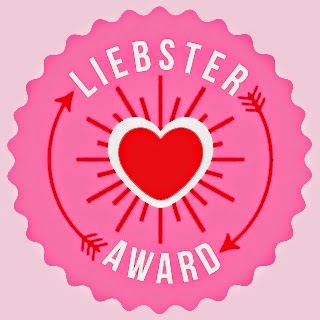 The Liebster Award is given to bloggers with less than 200 followers. The goal is to help people find these blogs that are worthy of a bigger following. In German "Liebster" means kindest, beloved, valued, and welcome.

The current rules for accepting this award are:

1.    I’m a Christian or, as one of my friends so aptly named it, ‘A Follower of The Way’.
2.    I was such a ‘girly girl’ when I was growing up.  While all the other girls were playing netball and hockey, I was passionately doing ballroom dancing.
3.    Later I made up for not playing sport and (even at my tremendous height of 5’ nothing) I played college basketball and, well into my forties, action cricket.  Now, two decades later, I walk for exercise.
4.    I’m accident-prone.  I blame this on my having ridiculously small UK-size 3 feet which are not feet at all and should, more accurately, be called ‘inches’.
5.    Through my late passion for sport, I’ve torn and snapped more ligaments and muscles than I thought a human body possessed.
6.    My first choice of career, at about age six I think, was to be doctor.  My high school course subjects were chosen with this in mind.  That career disappeared down the laboratory sink when, in Standard 8 (Grade 10) we had to dissect a frog.  Now any semblance of medical knowledge is restricted to first aid.
7.    I have three adult children, two of whom have wonderful spouses and my youngest who is engaged to an equally wonderful young lady.  My sons started a band called, Two Steps Left in which my youngest is the lead singer and rhythm guitarist and my eldest is the bassist.
8.    I rescue animals and people know that, if I can, I’ll help.  I currently have three rescue canine furchildren – Patrick the Yorkie; Angus the Scotty; and Castiel (named by my son), the Spaniel>  I also have five feline furchildren, the youngest of which is a feral rescue, Paisley, named for his beautiful markings and the fact that he keeps his tail curled up like a piglet – too cute.  Sadly, Paisley’s sister escaped and I never found her again.  My eldest is Max, who is nearly 20 years old and who is now becoming very frail.  The other three are my two pure black beauties, Panda and Cole and Oliver, my previous feral rescue.
9.    I love poetry and other writing and am trying to get the last two chapters of my first long story, Escape From Mount Vilipend, out of my head where they’ve been stuck for the longest time.  I suspect this might have a lot to do with not really believing that the work is any good but I do need to finish it.
10. I love to travel and would spend all my time writing and travelling or writing while travelling if it were possible.
11. I’m passionate about helping people and have started a business assisting myself and other people to develop an asset base of passive income.

My 11 Nominees, who may have more followers than I can discern, are:

And my answers to the 11 Questions are:

1.  If you were allowed to read books by only one author, who would it be and why?
A. The Late James Oliver Rigney, Jr, whose pen name for his Wheel of Time Epic Fantasy series was Robert Jordan.  I have read and reread this series and never tire of it.  To me that is the mark of a master-author.

2.  What is your favourite dessert?
A. Meringues of any sort and in any combination.  Mmmmm.

3.  On a Friday night, what are you most likely to do?
A. At home doing nothing spectacular.  I enjoy being at home.

4.  If you could change one thing about yourself, what would it be and why?
A. I would be confident within myself because ‘faking it’ becomes tiring after a while.

5.  Who is your favourite literary character? (You can pick one hero and one heroine.)
A. This is a difficult one.  Esther of the Bible must be my female heroine for her courage in saving her people; and Aragorn from Lord of The Rings for his strength (physical and mental) and humility – a combination I very much admire.

6.  What is your biggest dream?
A. I probably answered this in my random facts above.  I want to be financially free enough to experience the different cultures of the world and write – not about them but using them as catalysts for either poems or novels.

7.  What song could you listen to over and over again?
A. A number of songs actually – the most notable being - Royal Falcon by Parrish and Toppano; Barcelona by Queen; Dance With You by Live; Hear You Me by Jimmy Eat World; anything by my sons’ band, Two Steps Left.

8.  If your house were burning down, what would you take and why?
A. My animals.  Everything else is replaceable.  My writing is saved in the cloud and that’s important.

9.   Who is your inspiration, your hero?
A. Sarah Palin - without a doubt.  This lady was an exceptional Governor who, when she was nominated as Presidential Vice Presidential Candidate enjoyed an 82% favourability rating across both parties.  Her achievements are legend and yet she was vilified and even the church in which she worshipped was torched by political opponents who tried to destroy her.  They didn’t, she survived and thrived which I believe had a lot to do with her unwavering and unshakeable faith in Jesus in whose name there is infinite power.

10.  What advice would you give your teenage self?
A. Not everyone who appears to want the best for you, does.  Protect your heart   If you have any doubt, don’t!

11.If you were not in your current line of work, what would you be doing instead?
A. Retired because retirement has nothing to do with age, it’s a dynamic of finance.

My Questions to my nominees:
These are random questions and will not give you even the slightest inkling of what your personality is.  Choose the one which appeals most to you and give a few words on why.