Life happened yesterday so the continuation of Joseph's story-poem falls to today.  In fact, as I have so much going on in my life at the moment, I'm putting up the entire story.  I'll use my Sundays for other Faith Reflections and other ways to give thanks to The Lord for all that he has done and continues to do in my life. 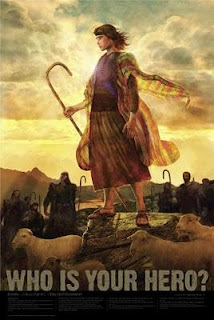 The days were short when I was young
And the nights so very long
I suppose every child feels that way
Not wanting to sleep, waiting for day
I knew each evening with my very first yawn
That there was an awfully long wait until dawn

My father, Jacob, had many children indeed
Twelve sons as well as some daughters to feed
We travelled the desert as many did before
With goats and sheep, pots and pans galore
Ever aware and listening out for our God's command
Waiting for Him to reach out His Holy Hand

I knew I was special and as I grew older
My boasts became louder, my actions bolder
My father loved me dearly, set me apart
And I traded on that love from the start
Today I'm not proud of the taunts I threw
And I understand my brothers' point of view

It was the cloak which upset them the most
"How many colours, what style" I'd boast
Then I started on those fateful dreams
They as the stars, bowing to me it seems
I knew it was a vision from The Holy One
And I know now that what was, had to be done

Yet what shock and torment on that fateful trip
When they grabbed my cloak and made me strip
I felt sure then that my dreams were wrong
That I'd misunderstood God's words all along
How could so precious a child; so loved; so good
Be killed for 'pranks' like a common 'hood'?

No thought in my head at the time for prayer
When I felt that knife move clean through my hair
My energy was turned purely to me, my life
Could I stand the pain?  Anguish was rife
Then - the pleasure of a short respite
When the quarrel began - 'Killing's not right!'

My emotions felt like a strip of rawhide
At once being stretched, pulled and plied
The moment things seemed to be under control
Hope would be dashed - a knife splicing my soul
I couldn't understand The Lord's mighty plan
My life appeared to be finished before it began

Their eventual decision was finally made
While I sat in the pit awaiting that fateful blade
A caravan of traders asked for water from the well
Then saw me and asked Reuben for how much I'd sell
The solution struck my brothers with blinding light
I was sold into slavery, went meekly without a fight

The glory and beauty of my first position
Kept me feeling that I liked the boy's last decision
My days as a shepherd came abruptly to a halt
I worked well for Potiphor, even cleaned his vault
Because I had always been very eager, fit and willing
I found the work exciting, stimulating, compelling

I didn't know much then about women and men
Couldn't understand Potiphor's wife's strange yet
She wouldn't leave me alone, asked odd-seeming things
One day she called me to her room to find her rings
As I stooped to search for the rings on the floor
She screamed, tore her clothes, rushed out of the door

I struggled within myself for long time afterwards
To understand the meaning behind her foul words
Even now knowing why I was sent to prison
Even knowing and comprehending the reason
Is hard.  I was so young, so completely innocent
How could Potiphor even think I would be indecent?

With hindsight, that oh-so wonderful ability
To see everything in perspective, so very clearly
I know Potiphor's rage was for his wife
And my sentence imposed to prevent household strife
Yet I cried for days in that dark, dingy cell
Trying to understand and not doing too well

I can say quite honestly, I grew up in the 'clink'
Believe me, it's really much harder than you'd think
But resilience has always been my middle name
Especially when fighting back is much more than a game
God's ways are not man's ways in anything He does
He used me when I was down with nothing more to lose

There were two inmates whom I'd met and befriended
A butler we called Abel, a baker known as Ed
They had both for some reason incurred the King's anger
Were also both aware of their imminent danger
We were all swapping reasons for why we were there
What we had done and what our chances were

Before Ed even started, a throbbing pain struck my head
And I closed my eyes momentarily and sat on the bed
His demeanour was arrogant, quite out of character
Probably spurred on by his friend's answered prayer
I wondered at the change until he told his tale
Which started off stormy and ended on a wail

How could I tell him? But I knew I must
What I saw was bleached bones lying in the dust
Of course he scoffed, asked who I thought I was
Dreaming up horrors and making his ears buzz
Could I not have also given some glimmer of hope
Why did I have to upset him?  He started to mope

As you've read in your Bible it is no folklore
The interpretations God gave me were absolutely sure
When the guards came to release him, he gave a shout
Abel promised he'd do what he could to get me out
After a time I thought God didn't love me anymore
As had happened in my life so many times before

When rumours of nightmares, dreamt by the king
Reached my ears, I wanted to shout out and sing
At last I'd be out of this dark dingy hole
What a relief to the spirit, food for my soul
Yet still I waited, waited and waited some more
My enthusiasm died as I stared at the door

How many times do we try to push forward God's aim?
How many times I was  guilty of preempting his plan
And here I was doing my own thing yet again
And blaming Him for my suffering and pain
What an arrogant young upstart I'd become
With more nerve than a Roman and then some

When the call finally came for my interpretation
I was filled with awe and not a little hesitation
But never being one to tremble in my boots
I stood straight and proud though chained hand and foot
As I listened intently to what the king had dreamt
Aware of his advisers' hatred, I yet stood unbent

The seven-year interpretation you all know so well
Showed once again how God had used me in my cell
Because as each new revelation came sprouting forth
God spoke directly of His compassion and wrath
The 'good years' came first which to me was testimony
That however harsh His judgment, He yet showed empathy

Needless to say, God's Word is always true
After the first two years of drought, the panic grew
At first only near neighbours, then those from far away
Poured into Egypt day after day seeking wheat and hay
When Jacob's sons arrived one day to plead for food
I remembered stars and moon bowed down and it felt good

Oh My God has a wonderful sense of the ridiculous
Not one recognised me - they thought me out of their class
I even gave them clue after meaningful clue
But even so there was not one of my brothers who knew
How I chuckled when I kept Benjamin and said
'Throw away the key' until Reuben cried 'Take me, I'm dead!'

When I asked him what he meant by his strange remark
His eyes filled with tears and his face became stark
'My father Jacob, my liege, is an old, old man
Who has already lost his most beloved son
Now Benjamin soothes his aching, broken heart
And he will die if Benjamin is thus set apart

How could any man, let alone a son, a brother
Not respond to that cry. Oh, how I loved my father
I have to tell you though, after my family arrived
I rubbed their noses in it, made them eat every word
Made them very aware of their subjugated position
Then laughed with them and we started on God's Mission

How I love my God, who know and understands all
How I marvel at the way He engineers a rise then a fall
Working His miracles to suit His Holy purpose
Healing, supplying, listening - there's nothing He'll miss
Take me as an example - I was an arrogant brat
And just look at what Our Lord made out of that!