As we grow older

As we grow older, life changes.  Some of these changes challenge us, others delight us but, as we grow, life changes.  I am an Earth Child and love nature, with all its variety.  This has defined who I am in a very real way.

Here is a glimpse of the cycle of my life.  I have three children, two boys and a girl (men and woman now :))
The genes run strongly in our family.  I put two pictures side-by-side and was amazed at  how similar my daughter and I look at comparable ages.  I take after my father, as does my elder son, while my younger son looks very much like his father.  My sons will each have their own posts - soon...

On my own journey, which is the only real barometer anyone has, there have been distinct and noticeable changes as I grown from a child, to teen, to twenty-something, then to being a wife and mother, to being single again with a career to becoming a grandmother and now, to where I am at the moment. An interesting journey to say the least.

Emotionally, I for one, often but definitely not always, have become more controlled and able to deal with and have a level of tolerance for a lot more of the rubbish people say and do.  It's a case of knowing that no one is perfect and that we are all on our own paths to make life as good as possible for ourselves; I have also developed an understanding that everyone is at their own stage on their own path and that's perfectly alright.  What I haven't managed to control and that's really as it should be, is to block the pain when a loved one is ill or dies.  That loved one can be any living being.  A few Sundays ago, my beautiful Great Dane girl, Dayna suddenly became ill and was rushed through to Emergency.  She spent the night at an emergency veterinary hospital and the next day I fetched her and took her to my vet. She was operated on and, despite all the will in the world, her disease was so advanced, that she couldn't survive.  The vet euthanased her on the operating table.  There are many times when I wonder if I did anything to cause her disease or if I could have prevented it.  That is despite my being old enough to know that no matter what I did or didn't do, what happened, happened and I need to get a grip.  Tears are still close when I think of her, which is often.


Altruistically, I used to always believe that it was my God-given duty to care for others. I still do in a very real way believe that.  What I neglected to do, however, was to give myself the same care and, it's only as I have grown older that I have come to realise that, in truth, precious few care for others, except as a means to comfort themselves.  There's nothing wrong with this and, thank goodness for it or there would be very little charitable work done.  I am now very selective in the work I do in this regard and am always cognisant of my limits - physically, emotionally and financially.  Here's a little initiative I started but had to stop because those people who should have been distributing the food to those with nothing, believed that they were also entitled and, in fact, more entitled to the food.  The immediate end of the initiative came when I was asked in a very aggressive manner by the people who were charged with delivering the food when I was going to provide them with their next package.  "We want our food."  I decided that I'm just not cut out to deal with the Takers of the world.


Recreationally, (my new word for the day :)), although the mind is willing, there are things my body cannot and will not even attempt.  I love ballroom dancing and it's always been my most pleasurable form of exercise.  However, where in my younger days, I had no problem being flung in the air to be caught in the waiting arms of a dancing partner, I would no more dream of doing that, than I would of abseiling again.  Yes, I did do it and yes, I have crossed abseiling off my list of 100 things to do and yes, I never have to do it again because I hated it.  I love river rafting but no longer feel the necessity to test the theory of flesh bonding to plastic as one careens through rapids which have been given numbers to designate their torture level.  I'm now happy to stick to the 'baby rapids' where I'm not in danger of concussing myself or worse if I fall out of the boat/canoe.  I'm really accident-prone and my children are extremely grateful that I have now foregone my adventurous activities.

Technologically, there are times when I feel like such a fool with all the new technology around.  I mean, I grew up in a time when every child had a Playstation - it was called Outside and we were allowed back into the house when the street lights came on.  We didn't live other people's imaginings, we had to make up our own stories for our own games and figure out how to make the props for our games too.  Anyway, where this is going is, a couple of months ago, I noticed that, where previously, my hair was dead-straight, it has now begun to curl naturally.  I'm in love with the look and feel of it but it did take me by surprise.  I was speaking to my daughter about it and she asked me to send her a 'selfie'.  Well - technology-block of note.  Firstly, I absolutely dislike being on either side of a camera and, secondly, I didn't (and still don't) have a clue on how to take a 'selfie'.  So, I took my smart phone, went to a mirror and tried to take a reasonable photo to show my daughter my hair.  Much hilarity but I did get to show off my hair. 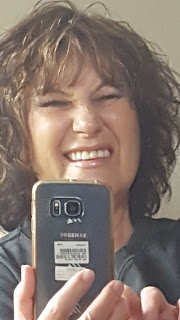 Humour has become one of the most important aspects of my life and I find ways, every day and many times a day, to laugh or chuckle.  Laughter really is the best medicine.