B
Bushmen or San People
Continuing my exploration into historical stories about people, places, animals of Southern Africa.  My research for each letter begins in the recorded works of Eric Rosenthal in his Encyclopaedia of Southern Africa, published by Frederick Warne & Co. Ltd in London in 1964.  From there other sources are included as and when relevant.
The most interesting aspect for me when researching the Bushmen or San people is their Social and Cultural life.  It is a governing system which modern society would do well to emulate.  The culture was and still is considered primitive and the people are still subjected to harassment and persecution because they do not fit into what is considered ‘modern’ society.
I could not write anything more succinctly than the article which appears on the Krugerpark website so I’ve included portions of that article without edit.
Click on the link to view the full article (http://www.krugerpark.co.za/africa_bushmen.html) -
“Due to absorption but mostly extinction, the San may soon cease to exist as a separate people. Unfortunately, they may soon only be viewed in national museums. Their traditions, beliefs and culture may soon only be found in historical journals.
The San are the oldest inhabitants of Southern Africa, where they have lived for at least 20 000 years. The term San is commonly used to refer to a diverse group of hunter-gatherers living in Southern Africa who share historical and linguistic connections.  The San were also referred to as Bushmen, but this term has since been abandoned as it is considered derogatory.  There are many different San groups - they have no collective name for themselves, and the terms 'Bushman', 'San', 'Basarwa' (in Botswana) are used.  The term, 'bushman', came from the Dutch term, 'bossiesman', which meant 'bandit' or 'outlaw'.

The San have no formal authority figure or chief, but govern themselves by group consensus. Disputes are resolved through lengthy discussions where all involved have a chance to make their thoughts heard until some agreement is reached. Certain individuals may assume leadership in specific spheres in which they excel, such as hunting or healing rituals, but they cannot achieve positions of general influence or power. White colonists found this very confusing when they tried to establish treaties with the San.
Leadership among the San is kept for those who have lived within that group for a long time, who have achieved a respectable age, and good character. San are largely egalitarian, sharing such things as meat and tobacco. Land is usually owned by a group, and rights to land are usually inherited bilaterally.
Kinship bonds provide the basic framework for political models. Membership in a group is determined by residency. As long as a person lives on the land of his group he maintains his membership. It is possible to hunt on land not owned by the group, but permission must be obtained from the owners.”
The perception of the Bushmen/San in 1964 was, markedly and understandably different from the modern understanding. 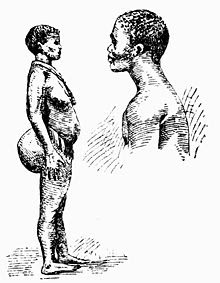 “Primitive race regarded as the aboriginal inhabitants of most of Southern Africa.  Of very small stature, rarely over 5 feet, they possess a number of physical characteristics peculiar to themselves, notably their wrinkled appearance, extraordinarily keen eyesight, skill as trackers, sense of music and art, and tendency to accumulate vast masses of fat in their buttocks.
They show considerable links with the pygmies of Central Africa and are believed to have emigrated from those parts.  Their language abounds in clicks and has only been studied with the greatest difficulty owing to the inability of scholars to make friends with them in the earlier days.  They are divided into a number of different groups, notably the Masarwa, who live in the Kalahari.  In earlier times, there were two types, those who dwelt on hills and those who preferred to live in caves.  None of them possessed the ability to build houses or huts, their accommodation being the most primitive shelters made of branches.  Nor did they have tribal organization in any accepted sense of the word.
Upon the advent of the European, they were unwilling to make friends with the result that they were hunted down and almost exterminated.  The survivors mostly retired to inaccessible parts and today the few that are still to be found live in the Kalahari and other barren areas.
Despite their primitiveness, the Bushmen are exceptionally good painters, their drawings being admired by experts of most countries.  Besides painting on the sides of cliffs and in caves, they decorated ostrich eggs with scenes of their own life, animals and the like.
Only in recent times has it become possible to publish a comprehensive dictionary of the Bushman language, mainly as the result of efforts going back to the 1850s on the part of the late Dr W H I Bleek (q.v.) who continued the efforts of an early missionary, the Rev. Kroenlein, to write down a small vocabulary.  Dr Bleek’s work was supplemented by that of Miss L Lloyd and of his daughter, Miss Dorothea Bleek.  To this day the Bushmen are unique in having virtually no missionaries working among them. The country inhabited by them included not only most of the Cape but also large parts of Basutoland, the Drakensberg and the Transvaal.”
Posted by Fe at 12:00