What does 'TGIF' mean to you?

In today's world, we are bombarded with TLAs, FLAs and a plethora of other acronyms - some meaningful, others not so much.  One of my pet hates is the incomprehensible text messages which I find impossible to decipher.  When grown men and women start using 'da' instead of 'the' in their correspondence, to me it means the beginning of the demise of a language; yet, to others, it means the evolution of the language, although I cannot understand how that can be.

My brother made a very pertinent observation the other day.  With the advent of emoticons, avatars or whatever other name they're called (there are many names), the written language is once more being reduced to hieroglyphics.  I see his point, although it was not something about which I'd even thought.

I've posted only a very few recognisable every day symbols here.  See how many you know - <3 is the symbol for 'heart'; :p - pulling a tongue; :) a smile; ;) a winking smile; :( sad; and so on.  How much more difficult is it to rather write 'I love you' than add <3?   There may be a few more letters but there's also a whole world more meaning.  I have decided that from now on, I'll make the effort to consciously catch myself when I want to use one of these modern symbols in my writing.  We are losing our language and it is mutating into something from which it evolved many thousands of years ago.

I read in the news a while ago that it is even being mooted that cursive writing will no longer be taught in schools.  To me, that is the saddest 'development' of all.  Will there come a time when the art of words themselves is lost?  I sincerely hope not and am so grateful that my adult children don't use ridiculous abbreviations in their text messages.

As I look forward to my weekend, one mutation in which I totally delighted when I saw it, is this rose from my garden.  A rose which God split perfectly down the middle even to the extent that the mid-petals were half cerise, half pale pink.  I was late in finding it but am so glad I found it in time to take some photos of it.  The rose bush itself produces flowers which are neither of those colours but are something in-between.  The bush has only ever produced this single half-and-half rose.

Have a wonderful weekend! 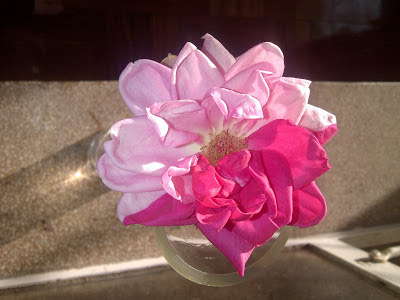 When Love overflows
Each petalled caress
Transforms
Into a perfect rose

When yearning cascades
Each satined ascent
Embraces
That cherished occasion