Shock is a killer...

At lunchtime today I had a taste of what it feels like to go into physical shock and my heart goes out to everyone who experiences it.   I can also understand the sometimes drastic effects which shock can have on one's body, even to the extent of a coma or death. 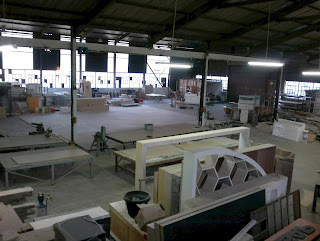 My brother was showing me his new spray booth at his factory - that's the oblong structure which looks like an open container up on the right of the picture - and the very efficient industrial extractor fans he's in the process of having installed. Well, without thinking, I put my left hand into the, as yet, unsecured extraction tunnel to feel how strong the suction was and my fingers met the furiously-spinning blades of the industrial fan.  For some reason unknown to me, I thought the extraction was generated from 'a big sucking machine' at the end of the tunnel.  I'm so clueless...

You have no idea how grateful I am that it only tore my nails and finger tips to shreds as well as bruised and bloodied my fingers which now throb like that 'dude downunder' (I don't mean Australia either...).  I could so easily have lost my fingers.  Thank you, Dear Father God and Your Angels who are watching over me.  With how accident prone I am, they have their work cut out for themselves. (No pun intended - well perhaps just a little...).

I walked quickly back to the office from the factory for some first aid and, it's just as well I sat down because very soon wave upon wave of nausea hit me; all the blood drained out of my face; I started shaking uncontrollably and my breakfast threatened to vacate itself as I began to faint - and that's for a minor injury.  I've been through much worse and not had the same reaction.  I think it was the acute awareness that I'd very, very nearly lost fingers and could easily have lost a hand, that pummelled my solar plexus and did me in.

Yes, I can honestly say that I understand the effects which shock can have on one.

This post was typed using only my right hand - very slowly - and I will now go and lie down with a painkiller or two...