Order of The Watchers

[Continuing the theme of my Epic Fantasy, ‘The Daighacaer’ (“Day-gar-care”); Extract from Book I, Escape from Mount Vilipend]
First, a word of thanks to John Wiswell of 'The Bathroom Monologues' (http://johnwiswell.blogspot.com/) for suggesting I use italics as a means to differentiate between the story and other information.  It makes the blog so much easier to read.  That said...

Honestly, there can be no more heart-wrenching experience than the anguish of trying to find a loved one who has gone missing.  As a mother, I experienced this all too often when the children were growing up.
In the story segment for today, Tirǽche has disappeared and Urus is frantic with worry.  He and Weda’Sel are going over the events which led up to Tirǽche’s disappearance:

Weda’Sel jumped up, almost tripping over Urus as he did so.
“Urus, we’ve been looking in the wrong place.  This is not about The Fai Berth” Weda’Sel almost shouted.
“It’s not?” asked Urus.  “The On’Dísera woman said they were Fai Berth.” 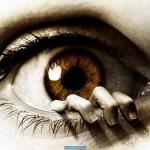 “Yes. No…” continued Weda’Sel.  “At least I don’t think it is.  Urus, On’Dísera is the Royal Title given to the Matriarch of The Order of The Watchers!”
“What?  The Order of The Watchers, Weda’Sel?  Surely you can’t be right?” Urus’s initial look of puzzlement turned to one of consternation.
“Urus, listen, I really believe we have to consider this possibility further” said Weda’Sel.
“What are you talking about, Weda’Sel?” replied Urus.  “I thought The Order of The Watchers vanished from Faeré aeons ago.”
“It would appear not” said Weda’Sel.
“Weda’Sel, are you sure?”
“I wasn’t until a moment ago but I can honestly now say that yes, I am, Urus, more sure than I am of anything except my own name!  The Order of The Watchers!”  Weda’Sel shook his head.
Weda’Sel continued speaking but to himself it seemed.  “Is it possible that they didn’t disappear from Faeré after all and that for some reason they have remained hidden from our sight yet in plain sight?  There’s something else I need to think about as well; could it be that the Fai Berth are, in fact, The Order of The Watchers?”
Weda’Sel turned to Urus.  “If the On’Dísera to whom you spoke, Urus, is indeed the Matriarch of The Order of The Watchers as I believe her to be, that would explain her conduct and her actions towards Tirǽche and you.”
Weda’Sel was frowning but, as Urus started to speak, he raised his hand.
“Wait a moment, Urus.  I think I may be on to something here.  Let me think.  If it was On’Dísera who appeared to you, you weren’t being interrogated in the sense that you thought you were.”
“Oh yes we were, Weda’Sel!  We most certainly were being interrogated” snorted Urus.
“Not in any way that you may have thought or believed, Urus.  This is important.  On’Dísera, as Matriarch of The Order of The Watchers would already have known everything about you and Tirǽche.  She would already have known everything about each and every one of us in fact; and by that I mean each and every one in our whole party.”
Weda’Sel ignored Urus as he once again opened his mouth to speak and said, rubbing his brow “I’m not exaggerating, Urus.  Her questions were probably more to get verbal commitment from you about where you stand - with The Lighte or with The Darke.  She would already have known your innermost heart, that part of you which is your unconscious essence, but nothing exposes the conscious and foremost thoughts, nor reveals the measure of a person more than making them verbalise their inner core under pressure.”
Urus made a sound which sounded suspiciously like a grunt.
Weda’Sel looked at him and shook his head with a wry smile.  “Think it through, Urus.  On’Dísera appeared only after the dance of the colours in the sky above the Blade Dragons.  As Matriarch of The Order of The Watchers, she would most definitely have known that The Blade Dragons are of The Lighte and that that dance confirms to all who saw it that the Blade Dragons are now living within the Time of the Blade Dragons and yet she persisted in referring to them as creatures of The Darke.”
“If she is indeed the Matriarch of The Order of The Watchers,” retorted Urus wrily.
“There is no female in the Realm of Faeré, be they of The Lighte or of The Darke who would presume to refer to themselves by that name, unless it was their name, Urus” said Weda’Sel, quietly but in deadly earnest.  “It would not be worth their lives for them to do so; and I mean that seriously.  The wrath of The Order of The Watchers, when roused, is a terrifying fury and not one which anyone would knowingly draw down upon themself.”
“I thought The Order of The Watchers didn’t involve themselves in our puny lives in that manner” said Urus, glibly.  “If Tirǽche is in the clutches of what appears to be viragos, all-knowing viragos at that…”
“We can’t take this lightly, Urus” cautioned Weda’Sel.  “It is not to be taken lightly at all.  If The Order of The Watchers are in fact the Fai Berth, that will explain why the Fai Berth have always remained aloof and been virtual strangers to everyone within Faeré.  Gentle conversation doesn’t come easily to the Fai Berth.  Neither does it come easily to The Order of The Watchers.”

I also found a poem which fits under 'O' quite well.  It doesn't relate to the segment necessarily but  it does to the love between Urus and Tirǽche,  so I'm alright with that...

UPDATE: I reply to comments in the thread itself and not by email. If you want notification when I reply, please let me have your email address. Also, I no longer allow Anonymous comments due to Blogger's spam filter acting up and allowing more spam than legitimate comments. Sorry for any inconvenience.
Posted by Fe at 18:24