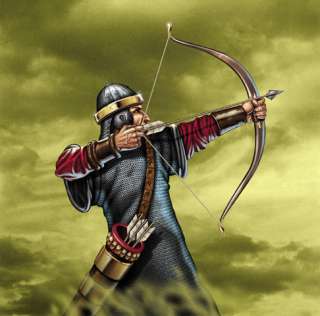 He was within jumping distance of Weda’Sel when a further arrow arced and found its mark.  Weda’Sel slumped on the ground, this time completely motionless.  Urus ran to Weda’Sel and saw the large pool of blood begin to form under him.  His fury erupted and, with one movement, he released his sword and, screaming at the top of his lungs, he raced headlong towards the advancing foe.
Through his bond with Weda’Sel he could feel that Weda’Sel was failing rapidly but even as his friend was losing his fight to live, Urus ran to avenge him.  Suddenly Urus felt Weda’Sel call to him through their bond.  “Don’t, Urus.  They don’t know who I am.  They saw only a banlogh.”
Urus ignored Weda’Sel.  Again Weda’Sel called to him “Urus, I need you.  Please don’t leave me to die alone.”  Only then did Urus turn and run back to Weda’Sel.  He wondered why he hadn’t been hit by any arrows.  He didn’t have time to care about that.  He knelt down beside his friend, gently moving Weda’Sel’s head on to his lap to make it a bit more comfortable for him.  He pulled his tunic off and tore it into strips.  With the strips, he tried to stem the flow of blood from the puncture holes in Weda’Sel’s thighs and arms.  There were so very many wounds.  The foe had riddled Weda’Sel with arrow-shots.  Urus pulled off and bundled his under-tunic into a loose ball which he carefully but firmly held against Weda’Sel’s chest where one of the arrows had, mercifully, hit Weda’Sel square on his xiphoid cartilage which probably saved his life.  The arrow ricocheted off him, leaving only a gaping puncture.
He could see his people in the distance advancing from behind him even as the three in front of him, who were much closer, moved inexorably and determinedly towards Weda’Sel and himself.
“If this is to be our end, my friend, at least the most important people in the world to us will be able to avenge us” he said aloud and then looked down as Weda’Sel tried to cough.
“This isn’t right” whispered Weda’Sel.  “The crest they’re wearing, it’s the same crest.  They’re in a wood just like in my vision.  One of the three is larger than the others and looks to be the leader.  I was meant to help him, the leader, overcome the odour darzim.  This wasn’t meant to happen.  It isn’t the same as my vision.”  Weda’Sel gulped from the pain of talking.
“Shhh, Weda’Sel, don’t try to talk.”  Urus didn’t know what else to say.  He could see Weda’Sel’s blood flowing into the grasses next to the path.  His friend’s life blood was seeping away and there was nothing he could do.  Tears of frustration and anger poured down his cheeks.  There was nothing he could do to save this valiant person’s life.
As Urus rocked Weda’Sel gently in his arms, he knew with certainty that their foe would arrive long before Tirǽche and their scouts did.  In silent acceptance, he held Weda’Sel and awaited their fate.  There would be fighting this day and his people would die.  Urus’s heart broke for that too.
*
“Why does a druid protect this banlogh?  Who are you?”  The voice boomed above Urus.  He brushed the tears from his eyes and lifted his head, even as he held Weda’Sel even closer against his bare chest.
The largest of the men was standing directly over Urus with his hands on his hips.  The other two stood at a little distance with their bows at the ready.  Their enormous da’ques stood off to one side.  Even though Urus had to look directly up at the man, he wasn’t intimidated, he was enraged.  The words he spat at the man were venomous in the extreme.
“This ‘banlogh’ is saviour of and leader to thousands who, with his help, escaped Mount Vilipend.  Our scouts came across you and were terrified by the vision of your crest which rendered the scout leader senseless.  ‘This banlogh’, whose name is Weda’Sel, believed that the manner in which your crest appeared to our scouts was a directive from The Lord Dayl to urgently assist you.  He instructed us all that we weren’t to follow him as this was something he needed to do on his own.”  Urus’s face became a deep, pulsating red in a fury which he found himself unable to contain; which he didn’t care to contain; nor had any intention of containing.
The foe looked visibly shaken as Urus continued.  “He was on his way to protect you!  He was trying to protect you from an odour demon he believed was about to attack you.  Protect you who fired on him for no reason other than that he is a banlogh.  Why do Yldryf shoot without ascertaining the danger first?  Who are you that you ignore the tenets of The knowledge of Ages?”

My poem is for both Weda’Sel’s pain and bravery

In the shadow of the blasts

We stand
Bloody
But
Unbowed

Against the tide of terror
We stand
Bloody
But
Unbowed

To smother base and evil
We stand
Bloody
But
Unbowed

Until history turns once more
We stand
Bloody
But
Unbowed
Posted by Fe at 20:05