[Continuing the theme of my Epic Fantasy, ‘The Daighacaer’ (“Day-gar-care”); Extract from Book I, Escape from Mount Vilipend]

[Pronunciations:  Weda’Sel (as it is spelled); Tirǽche (Tir esh); Urus (Ooh roos); Sidhe Nnat’Llõugh (Sid nat low – a Sidhe is a castle, Nnat’Llõugh is the Realm)

Background:  Weda’Sel first met Urus during the initial evacuation of Mount Vilipend and they very soon became close friends.  Urus’s leadership skills augmented Weda’Sel’s and the two became the de facto leaders of the group of many thousands whom they were to lead to safety.  Until the rescue of the baby Blade Dragons and the sudden change in the weather from icy wilderness to a warm and balmy spring, all attention had been focused on surviving.  In the ensuing time, the journey became far easier, affording people time to relax for the first time.  It is during one of the rest periods that the following extract occurs.

“Urus, where did you live, before Vilipend?” asked Weda’Sel.
They were in the middle of a midday meal and, at Weda’Sel’s question, Urus looked up in surprise.
“I’m an Elandran Druid, Weda’Sel.  I thought you knew?”
“No” replied Weda’Sel.  “I’ve never before thought to ask anyone about what their life was like before Vilipend because I spent so many lifetimes there that it’s the only ‘home’ I know.”
“My home is… was, The Elandra Woods.  It was the home of my parents and their parents before that, going back so many aeons that, like you, Weda’Sel, until Vilipend, Elandra was the only home I knew.  It’s so very sad that, besides myself, there are now none left to continue our life and work.  I wonder how our trees are coping.”
“The famed Elandra Woods?  That was your home?” asked Weda’Sel.
“Elandra, yes, although I wasn’t aware of any fame.”
Urus stood as he saw Tirǽche walking up to join them.  Weda’Sel also stood although he still couldn’t understand why it was necessary.  Urus had told him that it was the courteous thing to do.  Weda’Sel wasn’t sure about that but he stood to avoid the look of distaste he inevitably got from Urus when he remained seated.  Weda’Sel knew only that he preferred to avoid that look.  If he had to bob up and down all day to avoid it, he would do so.  In any event, he mused, the more he got used to it, the more it started to become natural to him.
“I was just telling Weda’Sel about my home” said Urus to Tirǽche.
“Oh, then I’m glad that I arrived when I did, My Love.  We’ve never spoken of it and I’d like to hear about it too.”
“It was so very beautiful.  You would have loved it.  So very unlike the stark terrain we travelled through previously and even very different from these plains.  Our woods embody all the beauty of Faeré.  I do hope they recovered after the grolls’ rampage through them.  Trees are resilient beings and I know that they would have organised themselves as best as they could.”
“Did you live within woods, Urus?” asked Tirǽche.
“Oh, I’m sorry, My Love, You weren’t here when I started telling Weda’Sel.  I lived in the Elandra Woods.”
“Elandra Woods?  The famed Elandra Woods?” asked Tirǽche in awe.
Urus laughed as Weda’Sel raised his eyes to the sky and then looked away to hide a smile.  He couldn’t have said why but he was pleased that Tirǽche had reacted to the mention of The Elandra Woods just as he had.
“Yes.  I’m an Elandran Druid.  It’s strange.  Weda’Sel also spoke of the Woods’ fame.  What is there about Elandra Woods that makes them so well-known?” 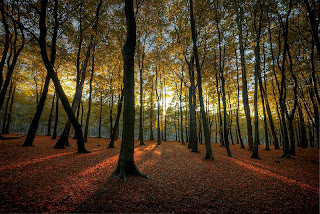